Impact we have made so far

Since the establishment of IDEFOCS, we have rehabilitated and reintegrated 3000+ and provided with jobs opportunities, http://se-forum.se/2013/03/12/more-than-3000-former-child-soldiers-reintegrated-into-the-society-and-labour-market/ presently we are working with 100 of them.

PROBLEM
Liberia’s two-parts, 16 years civil conflict are a story of much tragedy and disaster. More than three
hundred thousand lives were lost, and a million people were made displaced into refugee camps in
neighboring countries. Yet the greater marker of the war’s damaging effect is the immense population of
60,000 children that were either abducted and recruited or were forced to become child soldiers due to
some unforeseen circumstances. These Child soldiers committed wide spread atrocities; raping and
murdering people of all ages as they were instructed by their commanders, while under the influence of
dangerous drugs administered to them. Because they were easily influence, and just as easily dispose of
by these adults that had recruited them, these child soldiers became the hottest commodity in West
Africa’s wars and due to their huge volubility politician and warlord are re-recruitment them for new
conflict in others West African countries.

The challenges in Liberia are almost more then what we had experienced in Ghana, because most of the
warlords who were perpetrators of the act of recruiting children into soldiers now found themselves in
top government positions. And with the closure of the UN/Government of Liberia ‘s Disarmament
Demobilization Rehabilitation Reintegration (DDRR) program for ex-combatants, it seemed odd that a
grass root group like IDEFOCS would raise the issue of former child soldiers. But the stunning fact was
hard to resist: thousands of FCS was engaged into violent crime like armed robbery, rape and drug abuse
all over the country. When we arrived in Monrovia, the urge to work in Liberia was irresistible, as
communities became threaten from violent acts perpetrated by these abandoned ex-child combatants.
There was so much to be done in Liberia with FCS and WAFF rehabilitation and reintegration. But the
problem with Liberia was that the Joint Implementation Unit (JIU) that had run the DDRR program had
incidentally designed a short term program to deal with ex-combatants. FCS had joined the war at
different stages of their life and had gotten engage at different levels, fought at different length of time
and needed specific programs to address their respective situations. One of the main concerns at the
forum in the refugee camp had been the lack of survey to identify potential FCS and designed the
relevant program to facilitate the process of their rehabilitation and reintegration. The 21st Century Child
Soldier Survey had been designed for just the purpose.
However, the DDRR, instate of addressing the impediment, created a situation wherein hundreds of FCS
were left out of the process due to the lack of survey to identify their specific needs and designed the
relevant programs and time frame to get the program to work.

The UN Security Council resolution 1509(c) (2003) had mandated UNMIL to: “develop an action plan for
the overall implementation of a disarmament, demobilization, reintegration, and repatriation (DDRR)
program for all armed parties, with particular attention to the special needs of child combatants ...in the
DDRR process”. Many human right activists had observed that despite the logistical challenges of
disarmament and demobilization, reintegration—the acquisition of civilian status and sustainable
employment and income—is considered the most difficult phase of any DDR process. An Institute for
Security Studies (ISS) paper calls it “the Achilles heel of DDR.” Reintegrating into Civil Society is so
difficult that it requires longer term programs while different criteria should be applied to special groups
so that resources can be allocated to those who really need them. The DDRR program failed to
rehabilitate and reintegrate thousands of FCS with more than 80 million US dollars spend during the
entire process. There yet remains a more serious impediment as several FCS are unaccounted for and
even those who the program attempted to have trained technically /vocationally are faced with the
battle of social reintegration, and lack of job opportunities.
Considering these challenges, we decided to implement the SDRR program designed in Ghana to help
transform the lives of former child soldiers in Liberia. The SDRR was designed to buttress the
UN/government DDRR program. Subsequently, the Metric was designed to be more economical, and to
have full impact through long term program that would address the specific needs of FCS as stipulated
within the UN Resolution 1509©.

IDEFOCS is a non-profit organization with a sustainable Model that is providing a safe and an enabling environment for Former Child Soldiers (FCS) Women associated with fighting forces through the rehabilitation programs for the prevention of recruiting children as child soldiers, the redrafting of FCS and the migration of war. Today IDEFOCS provides trauma counseling, both vocational and technical skills training jobs placement with other community programs such as Sanitation, Agriculture and Peace building activities.

STRATEGY
Our innovation is the Survey, De-traumatisation, Rehabilitation and Reintegration (SDRR) strategy. The strategy contains four (4) compelling phase from charity to sustainability. Below is how each of the phases works: 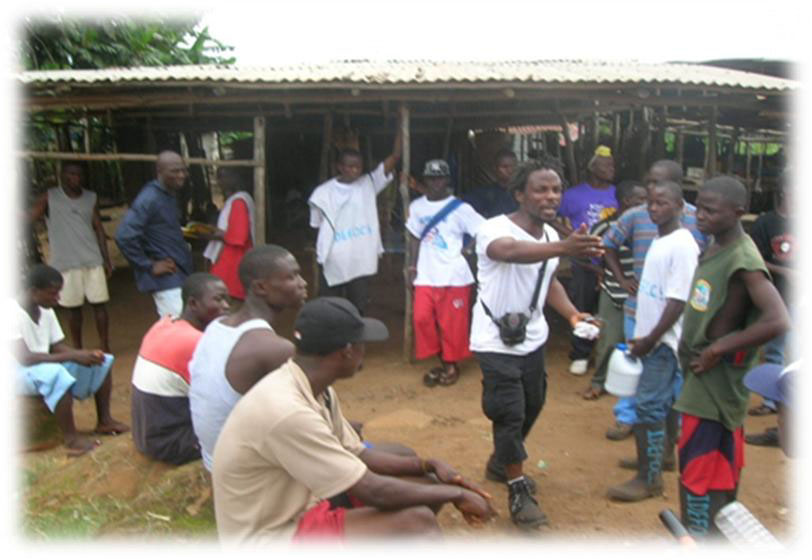 Our sustainable model is called the Post Reintegration Investment (PRI). The PRI is an impact first investment model; it does not separate profit from non-profit, it is designed model that blends the two values to achieve both financial return and social impact. It is using the pre-existence asset of the IDEFOCS SDRR metric to eventually move from donor driven to executing a sustainable impact investment decision making process.

Our day to day activities usually focus on developing the program of IDEFOCS and the well being of our family. We usually signed in Monday at 9:00 pm to implement previous meeting agenda for the week and Friday we signed out to evaluate our weekly activities. Currently, we are conducting a research project called Ghetto Outreach Forum. The research wants to discover why psychoactive substance is prevalence amongst former child soldiers and other youth associated with violence and crime.

We have won many awards, from Afrika to Sweden to the USA. If you are interested you can read more on them on the next page.